We like coming to work everyday and pride ourselves on our fun work environment, so it was time to express that feeling through video.

Here were the rules:

The winning team consisted of Jake Gregg and Josh Kallstrom. We asked them about the process, and this is what they had to say: 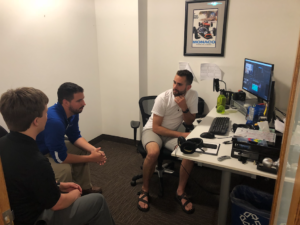 How did you feel when you first learned about the video project?

JG: I thought it would be really hard to do because we’re all accountants and not creative. Well…limited creativity.

JK: At first, given the vague directions of “make a recruiting video” was intimidating. There are so many different ways you can go with a project like that and trying to figure out an idea we can do that fits the goals we had can be difficult.

What was it like to work in your teams?

JG: Working in teams really helped bring in ideas to the storyboarding process and allowed us to be more creative than if we were just working on our own.

JK: It was helpful working in teams so we could just throw out examples of videos and debate what we liked and didn’t. It helped direct us on where to go.

How did you come up with your idea?

JG: We wanted to create a video that was different from the “standard” recruiting videos, so as a team, we looked for ideas online of what other companies had done and incorporated ideas from many videos into ours.

JK: We found a recruiting video for a different company and really liked how it flowed and the unique style they used. We were able to base our idea off of that.

JG: The day of filming was my favorite. It ended up being more fun than I had expected. It was really cool to see the video coming together and also see what the other teams were doing.

JK: The simplicity of our idea made filming extremely easy. All of our video was voiced over and short cuts so we didn’t have to spend a long time redoing different takes.

How did you feel when you found out you won?

JG: I felt proud that our team was able to come up with an idea that the firm liked – we were very happy with how our video turned out.

JK: It was a sense of relief. I was very confident in our product, but you never know what the competition will produce.

About the Author: Froehling Anderson